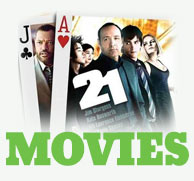 Gambling in the Movies: Our Ten Best Gambling Films

There have been hundreds of movies made about gambling, and countless more where gambling plays some sort of a role. After all, there's no easier way to create drama then to have a person's fortunes in life come down to a single roll of the dice or turn of the card.

The movies on this page might not make a definitive list of the ten best gambling movies ever made, but they're a great introduction to what's out there when it comes to good movies about gambling. Some of these are truly great films, while others are notable for a particular scene or character, and still others are just plain fun. Here's a look at ten of the most renowned gambling movies ever made.

The Color of Money continues the story that started in The Hustler (which also makes this list) 25 years earlier. Paul Newman is back again as "Fast Eddie" Felson, this time mentoring – and then rivaling – a new hotshot pool hustler, Vincent (Tom Cruise). Felson may be past his prime, but he proves to be just as dangerous as ever, even if he never quite has full control over his protégé.

With a great plot, interesting characters and some truly dramatic pool scenes that are boosted by cameos from actual top pool players of the era, The Color of Money is an underrated film. The events may be fictional, but the excitement of gambling and the treachery involved in hustling are captured perfectly.

Most Popular Pages on

Eric "The Kid" Stoner is a young poker player who wants to be recognized as the best around. To earn that kind of respect, though, he'll need to beat Lancey "The Man" Howard, a veteran of the game that seems unbeatable. After some early losses, Stoner gets his chance to beat Howard in a high-stakes game. After ensuring that their heads-up confrontation will be played fairly, "The Kid" goes on a roll that leads to one of the most famous hands in movie history.

While The Cincinnati Kid might seem dated today – the players are playing five-card stud, which isn't exactly a casino favorite these days – the dramatic finish accurately captures the highs and lows that every poker player has felt during a monster pot. Like many other poker movies, it also has a focus on the integrity of the game, with Stoner turning down the opportunity to clean out his nemesis through dirty dealing.

Rounders is a fictional tale of high-stakes, underground poker games being held in New York City. It stars Matt Damon as Mike McDermott, a law student who is also a strong poker player who dreams of playing at the World Series of Poker. He quits after losing everything to Russian mobster Teddy "KGB" (John Malkovich), but gets dragged back into poker when his friend Worm (Edward Norton) needs his help to pay off debts.

Rounders shows off a side of the poker world most of us will never see, but one that certainly exists – for proof, just see the recent bust of an illegal gambling ring in the United States that hosted celebrities and athletes in high-stakes games around the country. It's considered a classic by many poker fans, both for its compelling story and its relatively plausible poker action.

This movie chronicled the story of the MIT blackjack team. Starring Kevin Spacey and Laurence Fishburne, it suffers from a serious problem with casting: while most of the members of the actual team that won millions through card counting were Asian-American, most of those characters are white, which caused serious controversy when the movie was released. But while that's only one of the many inaccuracies in the film, it's still a good introduction to the incredible story of how a group of college kids managed to beat some of the world's biggest casinos at their own game.

While this isn't strictly a gambling film, the first James Bond movie starring Daniel Craig as the superspy centers on a high-stakes poker game that pits Bond against a wealthy terrorist financier. This game is played for stakes that would make even the top professional players in the world blush: there's a $10 million buy-in, and Bond actually has to buy in even deeper to stay in the game. Between hands, Bond must deal with attempts on his life and other threats.

Casino Royale has been praised for successfully rebooting the James Bond franchise in the modern era. For gamblers, the movie captured the feel of high-stakes poker well enough, though it was a little less careful with the details. This culminates in the climactic hand, which should go down as one of the most improbable in movie history.

While the sequels may have been disappointing, this remake of the 1960 "Rat Pack" movie of the same name was a huge hit, and with good reason. It's not strictly a gambling movie, but with most of the film taking place inside a casino, it's hard to keep it off this list. The film follows Danny Ocean (George Clooney) as he puts together a team to pull off the biggest casino heist of all time: robbing a vault shared between the Bellagio, Mirage and MGM Grand casinos.

Gambling mostly takes a backseat in this film, being heavily referenced but only quickly shown. Instead, Ocean's Eleven stands on the strength of its outlandish premise and superstar cast, which included luminaries like Brad Pitt, Matt Damon, Bernie Mac, Don Cheadle, Julia Roberts and Elliot Gould, among others.

This film is based on the true story of Frank Rosenthal, who ran three mob-owned casinos in Las Vegas during the 1970s. In the film, Robert DiNero plays a fictionalized character named Sam Rothstein who is asked to operate the fictional Tangiers Casino for the mob. It also stars Joe Pesci as a mob enforcer, and Sharon Stone as Rothstein's wife.

While all of the details are fictional, Casino tells a very real story of change in the gambling industry. Over time, we see how organized crime is eliminated from the picture, allowing the "family-friendly" and corporate-owned casinos that populate Las Vegas today – though the movie makes us wonder if the change was actually of any benefit to the city or the millions of players that visit the casinos each year.

Perhaps the most critically-acclaimed gambling movie of all time, The Sting is really more about running scams than true gambling. Starring Paul Newman and Robert Redford as the con men that are looking to take a huge sum off of a mob boss, the movie features a past-posting scheme in which bets are placed on horse races that have already taken place. But in reality, the con goes much deeper than that, which makes for a layered and highly entertaining film.

The Sting was nominated for ten Academy Awards, winning seven (including Best Picture). It has received almost universal praise since its release, and it's easy to see why: with an incredibly engaging premise, excellent performances, and a brilliant script, this is a gambling movie for the ages.

Woody Harrelson plays Billy Hoyle, a former college basketball player with a gambling problem who is on the run from gangsters. He makes his living hustling at basketball courts, counting on his goofy wardrobe and the fact that he's white to get his opponents to underestimate him. After hustling Sidney Deane (Wesley Snipes), the two team up to hustle games throughout Los Angeles – only to find out that it isn't always clear who's hustling who.

Featuring memorable performances from Harrelson, Snipes and Rosie Perez, White Men Can't Jump may be the most "quotable" film on this list. It's hard to say if it's a realistic portrayal of gambling on street basketball, but for the most part the film feels plausible – and even when it doesn't, you'll be having too much fun to notice.

We mentioned The Color of Money above, but sometimes you just can't beat the original. This classic movie is based on the 1959 novel of the same name, and tells the story of Paul Newman's Eddie Felson as he attempts to take on the legendary Minnesota Fats (Jackie Gleason). It's a movie that is credited with singlehandedly renewing interest in pool among the general public.

While it's a movie about gambling, The Hustler isn't strictly about glamorizing hustling and betting. It's a movie that explores both the highs and lows of the hustling lifestyle, as Felson wins big and loses big – both at the pool table and in life. This is definitely a must-see film, especially if you've seen the more modern The Color of Money and want to see where Newman's character earned his reputation.