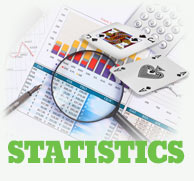 We all know that lots of people have an interest in gambling. But do you have any idea just how many people gamble? The numbers are simply incredible, and they've only grown in the last two decades as online gambling has become more and more popular. Here's a look at some of the numbers that help give us an idea of the scope of the modern gambling world.

Trying to figure out exactly how many people around the world gamble is an inexact science. It's hard enough to be absolutely certain about the numbers in any one nation, so trying to cobble together a worldwide picture comes with a lot of potential error.

Still, there are numbers out there. For instance, a group of researchers from Washington University at St. Louis did a study on gambling rates and problem gambling in 2005. Their best estimate came to a total of 1.6 billion people gambling at some point during a given year, with over 4.2 billion having gambled at some point in their lives. With the increasing reach of online gambling, those numbers have probably only grown larger in recent years.

Not all countries are equally enamored by gambling, though. Some nations have heavily restricted – or even banned – gambling, while others see placing bets as a major part of their way of life. So just which countries have the highest rates of gambling?

While there are different ways of measuring this, it's hard to pick a nation that's more into gambling than Australia. According to many studies, the average Australian spends more money on gambling than in any other nation – over $1,200 per adult each year. That's not that surprising when you consider that over 80% of Australian adults are said to be gamblers, which is also the highest rate in the world.

What's all the more amazing is how far ahead Australia is when compared to most of the world. A 2010 study showed that Singapore (which has two very new and successful casinos) was close behind Australia. But no other nation spends half as much per adult on gambling, with nations like Ireland, Canada and Italy all spending under $600 per adult per year on betting.

That's not to say that those in other countries aren't serious about gambling as well. In the UK, studies show that nearly 75% of adults gamble from time to time, and 85% of American adults are said to have gambled at least once in their lifetime – with 80% of them having done so in the last year.

Some More Statistics About Online Gambling

Online gambling is relatively new, and regulations vary tremendously from jurisdiction to jurisdiction, as does reporting. This means that finding reliable statistics for online gambling can be very difficult, though data reporting is becoming better every year.

A 2013 survey by SuperData Research found lot of information about just who gambles online, and how much gambling they do. One surprising finding that goes against most gambling stereotypes is that 57% of online gamblers in the United States are female, though this includes social casino gambling that may not be for real money. Less surprising is that online gamblers tend to be young, with well over 40% ranging in age from 21-34.

Other nations have taken steps to measure the size and growth of online gambling as well. In the UK, a survey taken in 2010 and early 2011 found that over 11% of the British public had taken part in "remote gambling" over any given four week period – more than the number who were gambling in an entire year just a few years earlier. In 2012, the size of the UK online gambling market was pegged at £2.28 billion – over £1 billion more than in 2008.

Finally, mobile gambling has also been on the rise, especially in just the last few years. In 2012, numbers from the UK showed that mobile gambling was up 75% year-over-year, and that it now accounted for over 25% of all gambling related searches. It's no surprise that many industry experts believe that in the near future, mobile devices may be the primary source of online gambling worldwide.

How Many People Gamble in The US?

A Gallup Poll back in 2007 showed that 24% had visited a casino, 2% gambled online, and 46% had bought a lottery ticket. More recently, in 2016, another Gallup Poll showed 64% of Americans had gambled in the last year, with a still small 3% saying they'd gambled online.

How Many People Gamble In The UK?

A Gambling Commission Report shoed that 48% of responders had gambled in the previous four weeks, with 17% of those doing so online.

What Percentage Of People Gamble?

An estimated 26% of the world's population gamble in any given year, but this is a very approximate statistic as it would be impossible to accurately measure.