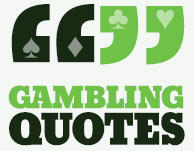 Gambling has been enjoyed by mankind since before the written record of history. Now that’s quite some time. So, with it having been around for so long, it’s had plenty said about it, and we’re revealing to you some of the best gambling quotes from across the years.

We’ve got some downright funny winning quotes, others are more morose, others still are insightful, and the rest? Well, they may just offer you a new way of thinking.

Here's a quick look at some of the greatest quotes on betting ever said (or written).

Who doesn’t love a good ol’ play on words? Especially when their simplicity reveals such profound wisdom. The idea is simple and just as relevant to your prince as it is to your pauper. Go wild with the winnings you get from gambling and spend it how you please, but don’t put the money for your food and rent into a bet.

The best throw of the dice is to throw them away.
– Italian Proverb, 1790 (first recorded in writing).

Popular amongst those who don’t like gambling or risk-taking. And, as Italy was, and still is, very Catholic, it’s no shock that they claimed this proverb. You never know where the dice will land, and this proverb asks why you should bother trying your luck.

The appeal and temptation is acknowledged, after all the dice are already in your hand, but you can still walk away. You lose the chance of a potential win, but you can be certain you’ll suffer no loss. Gamblers prefer to live by, "nothing ventured, nothing gained", and give themselves over to Lady Luck!

In a bet, there is a fool and a thief.
– Old Proverb

The cold light of day shone on any bet. A harsh approach, it suggests that the winner, the thief, lured in the innocent fool and robbed them.

While there can only be one winner, usually the bookmaker or casino, and the odds are stacked against the gambler, it’s all in the name of fun. If you go in knowing all this and set limits, it’s hard to call you a fool.

A dollar picked up in the road is more satisfaction to us than the 99 which we had to work for, and the money won at Faro or in the stock market snuggles into our hearts in the same way.
– Mark Twain (1835-1910)

Author of the great American novel, The Adventures of Huckleberry Finn, Mark Twain made a lot of money from his successful writing career but after a couple of disastrous investments had to file for bankruptcy.

A man after our own hearts, he says that it's always sweeter to make a dollar on a great bet than to earn it through grafting on a hard day's work. Maybe it’s because of the thrill of the win, the risk involved, and the instant gratification. Or maybe it’s the glamour and because we didn't work for it. Either way it feels like easy money. Free money. And that’s worth celebrating.

By the way, if you're wondering, "Faro" is a card game that was very popular in the 1800s until it was later surpassed by poker.

An American humorist, cartoonist, and journalist, Kin Hubbard always got his point across by making us chuckle. And the above quote is no exception. He plays with literal meaning, yes your wallet will have more of a bulge, but his point is clear.

There’s no risk involved in folding your money over once, so it’s safe. But if you are looking to double your money, you need to step out of your comfort zone.

Using chips in casinos is probably how so much money gets bet in each game. When you win big, you know about it and you are literally rolling in it, but when you want make a bet, it doesn’t seem like much to put down a few chips. Especially the chips with higher value.

The guy who invented the chip worked out that this simple trick meant way more people would part with more money. It’s like spending with a credit card. When there’s no hard cash involved you lose a sense of the value.

Of course, another advantage is that it keeps games organized, and with chips being thrown around from player to game to player, they need to be durable, the kind of durable that paper money lacks.

Terrence Murphy has written a lot about gambling over the years, and his alter ego, VP Pappy, is quoted across many gambling magazines. His observations about gambling tend to be insightful yet tongue-in-cheek, probably borne from his own experiences, and the quote above ticks those boxes.

We’ve all been there, believing with all our being that THIS roll is the one. And when it’s not, it’s the one after that. Or the one after that. And it goes on. But this doesn’t have to be your fate! There's more than enough strategic information out there to make sure you're playing your games of choice the right way.

A funny gambling quote from a much-loved comedian. Mitch Hedberg’s deadpan style appealed to audiences across his short-lived career and poked fun at everyday observations. He became something of a cult icon before his premature death.

Just like this quote, he used a lot of one-liners with snappy punchlines to get the laughs.

You know, horses are smarter than people. You never heard of a horse going broke betting on people.
– Will Rogers (1879-1935)

Will Rogers was a Hollywood star of his time and led the field in political wit, and used his great sense of humor to entertain the public. This quote takes a direct approach, but the joke is still pretty funny. Funny and true as it ridicules us for our ways of having fun.

Known for being temperamental amongst other fellow famous gamblers, this professional has got himself the nickname of 'Poker Brat'. But with that fire comes talent, he’s won a record 14 World Series of Poker bracelets over the years, winning loads of money along the way!

We can see from his success that he’s very skilled and, from what he says above, might not be so lucky. That’s the beauty of games like poker, though. A mixture of strategy and luck will get you that win meaning that players with less ability might actually win against those with all the know-how. With luck thrown in, you never know what will happen and that’s what keeps players coming back over and over again for more.