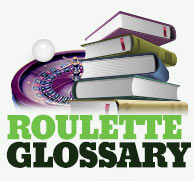 Interested in roulette? It's a great game for those new to online gambling, as it is easy to play and a lot of fun, too. However, there's still a bit of terminology you should know before you get started. Knowing the correct terms will definitely be helpful when playing online and will give you much more confidence if you decide to play roulette in a live casino.

Here's a quick rundown of a few key terms you'll want to know before you start playing online roulette.

American Roulette: The American version of roulette, in which the wheel contains an extra pocket. With two zeroes on the wheel, this version of roulette has a higher house edge. These wheels are most commonly found in the Americas. Online casinos typically offer both American and European roulette as options.

Biased Wheel: A wheel that is not properly balanced. The result is that some numbers are more likely to win than others. This can allow players to gain an advantage over the casino by betting on the numbers that are more likely to win. Biased wheels are less common in modern casinos, and essentially non-existent at internet gambling sites.

Column Bet: A bet that covers a column of 12 numbers on the table layout. If any of those 12 numbers win on the next spin, this bet pays out at odds of 2-1.

Corner Bet: A bet that is placed on the corner of four numbers in a square on the roulette layout. This bet covers all four numbers, and pays out at odds of 8-1.

Croupier: The term for the casino staff member who operates the roulette wheel. The croupier can also be referred to as a dealer.

European Roulette: The European version of roulette, in which the wheel contains only a single zero. This lowers the house edge, making it a better version of the game for players. This is the version of roulette most commonly found not only in Europe, but also in Asia and Australia.

Inside Bets: Bets placed on the inside of the roulette layout. These bets tend to cover only a small number of bets, but pay out with higher odds as a result.

Odd/Even Bet: A bet on whether the next number will be odd or even. A winning bet pays out at even money.

Outside Bets: Bets placed on the outside of the roulette table layout, such as odd/even or red/black. These bets generally cover large amounts of numbers, and pay out at lower odds as a result.

Six Line Bet: A bet that covers two lines (or "streets") of three numbers each, or six numbers in total. If any of those six numbers are hit on the next spin, this bet pays out at 5-1.

Straight Bet: A bet on a single number. If that number is the winner on the next spin, this bet pays out at 35-1 odds.

Street Bet: A bet on three numbers in a horizontal line on the table layout. If any of those three numbers win on the next spin, this bet pays out at 11-1.