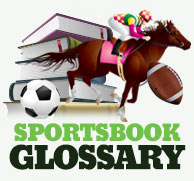 Online sports betting can be a great way to place wagers on your favorite teams and competitions. However, if you’re fairly new to online gambling or sports betting in general, there may be a lot of terms that you’re unfamiliar with. Before you jump into betting on your favorite sports, our gloassary a look at some of the terms you’ll want to learn.

Against the Spread: A team’s record against the point spread, rather than their official record in competition. This record gives bettors a better idea of what a team has accomplished in relation to the odds placed on them.

American Odds: Odds used to tell punters the payouts on a given bet. In American odds, favorites are listed with negative numbers, while underdogs receive positive numbers, and all numbers are based on a hypothetical $100 bet. For instance, odds of -150 mean that you must bet $150 to win $100, while odds of +150 mean a $100 bet would win you $150. Most online gambling sites will allow you to choose which odds format you prefer to display.

Bookie: Slang for a bookmaker or sportsbook. This term is frequently used to refer to illegal operations rather than regulated bookmakers.

Bookmaker: An individual or organization that sets odds and takes bets on sporting events. Also known as a sportsbook or a bookie.

Chalk: A favorite, particularly one that is a large favorite over the competition.

Cover: To win against a point spread. For instance, a team favored by seven points would cover if they won by eight points or more.

Decimal Odds: The odds most frequently used in Australia and continental Europe. These odds tell you the ratio of your bet that you will end up with should you win the bet. For instance, an even money bet will have decimal odds of 2.00, as winning your bet will mean you receive your bet back and receive the same amount in winnings, doubling your initial investment.

Dime Line: A bet in which the relative odds (expressed in American odds) on the favorite and underdog only differ by 10 points. For instance, the odds on the favorite may be -125, while the underdog pays +115. Dime lines and nickel lines are popular promotions at Internet gambling sites.

Early Line: The first line posted by a bookmaker on a sporting event.

Favorite: The team or player that is expected to win a sporting event.

Field: A group comprising all options that are not otherwise available for betting. For instance, in a golf tournament, there may be individual betting options on a limited number of players with a higher chance of winning, along with a "field" bet that covers all other players participating in the tournament.

Fractional Odds: The popular form of expressing odds in the UK. Odds are expressed as a fraction that represents the size of the potential win should a bet win. For instance, an even money bet may be listed as 1/1 (or "evens"), while a bet that pays +200 in US odds or 3.00 in decimal odds would be listed as 2/1 in fractional odds.

Futures: Bets on the outcome of a league or competition well before the end of that competition. For instance, players may place a future bet on the winner of the Super Bowl at the start of the NFL season.

Head-to-Head Betting: A bet on which of two competitors will perform better in a competition. This is common in golf or auto racing, and guarantees that one side of the bet will win (or the result will be a push), as in a game or match between two teams.

In-Play Betting: Bets that are made during a competition that is in progress. These bets are typically on the outcome of the event, with odds changing based on what is happening in the competition. Smaller bets on events during the game or match are also possible. In-play betting is most common at online gambling sites.

Juice: Also known as the vigorish (or vig), this is the edge built into the odds by the bookmaker. For instance, on an even bet, the "fair" odds on both sides would be +100 in American odds. However, after the vig is applied, the odds on each side may be -105 or -110 instead.

Money Line: A line that expresses the odds that will be paid out if a player or team wins an event.

Nickel Line: Similar to a dime line, but with only five cents of juice. For instance, while dime lines on a contest may be -125 and +115, the same contest with a nickel line might have odds of -122 and +117. As with dime lines, nickel lines are often offered as a part of online gambling promotions.

Over/Under: Also known as totals betting, this bet is on the total number of points, goals, or runs scored by both teams in a game. Players may bet that the final number will be over or under the posted line.

Parlay: A group of bets that must all win in order to pay out to the player. These bets are more difficult to win than bets on single events, but also pay out at higher odds. These bets are sometimes called accumulator bets.

Pick’em: A point spread term for when neither side is listed as a favorite or an underdog. Instead, this works essentially as a money line bet with the posted odds paying out if you pick the winning side.

Point Spread: A method of handicapping bets so that both sides of the bet have close to equal chances to win. The favored team will "give" points to the underdog, with the favorite being required to win by more than that number of points in order to win the bet. Meanwhile, the underdog can win the bet even by losing, if they lose by fewer points than the listed point spread. For example, if Team A is favored by 5.5 points over Team B, a bet on Team A will win if they win by six or more points; a bet on Team B will win if they win the game or lose by five points or less.

Prop Bet: A bet on anything not directly related to the outcome of a game. These bets can cover things like the performance of a single player, the results of a pregame coin toss, or who will be the first player to score. In internet gambling, prop bets are commonly offered on large events such as the Super Bowl.

Punter: Another term for a bettor, one that is especially popular in the UK and Australia.

Push: A bet that results in a tie. In most cases, a push means that the bettor will receive their money back, though pushes may have different effects on parlay bets.

Teaser: A bet in which players can receive a better point spread than the one posted as the official line. In exchange for the teaser, players are usually required to bet on multiple games, and will receive less favorable payouts than on a normal parlay bet.

Underdog: A team or player that is not expected to win an event, and thus pays out at higher odds.