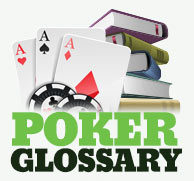 Poker is a great game and a popular choice for those who want to enter online gambling by playing a game of skill against fellow players rather than battling a casino site. However, it can also be a little intimidating to those who are new to internet gambling, as there is a lot of jargon and terminology that can seem foreign to new poker players. Here's a look at some of the more important words and phrases you'll want to know before you jump into online poker!

Add-on: An opportunity offered during tournament play to buy extra chips. Usually offered only once during a tournament, players may purchase an add-on regardless of the size of their chip stacks when the add-on opportunity is offered.

Ante: A small bet required of all players before the hand begins. Antes are more common in draw and stud cash games than in hold'em games, though they are commonly required in the later stages of tournaments in all forms of poker.

Bad Beat: The loss of a hand after you had a high probability of winning, usually because of an unlikely card helping an opponent.

Big Blind: The larger of the two forced bets at the start of a hold'em hand.

Bet: To put money into the pot. This usually refers to the opening bet on a betting round.

Blinds: Money that one or (more typically) two players are forced to put into the pot before the cards are dealt.

Bluff: A bet made with a weak hand in the hopes of winning the pot by forcing your opponents to fold.

Board: The face-up, shared cards that are also known as community cards.

Boat: An alternative name for a full house.

Bounty: Bonus cash awarded for eliminating players during a tournament.

Button: A marker used to indicate the dealer position, and the last position to act on most betting rounds in hold'em games.

Buy-in: The minimum amount of chips required to be purchased in order to enter a cash game, or the cost of entering a tournament.

Call: To match a previous player's bet on a given betting round.

Cash Game: A poker game in which all of the bets and chips represent real money.

Check: To not make a bet and essentially "pass" your option to the next player.

Check-Raise: Initially checking, but raising when play returns to you if another player bets. This is often seen as a tricky play used to disguise a strong hand.

Continuation Bet: A bet made on the flop by the player who raised prior to the flop.

Draw: A hand that is not yet made, but which has strong potential to improve. Typically, the hand one is hoping to improve to is used as the name of the draw, such as a "flush draw" or a "straight draw."

Fish: A derogatory term used for a weak poker player.

Flop: The first three community cards dealt in a game of hold'em, as well as the name of the betting round that follows.

Flush: A hand containing five cards of the same suit.

Freeroll: A name given to tournaments – usually offered at online gambling sites – in which a player does not have to pay an entry fee to participate, but in which real money prizes can be won. It also refers to the situation in which a player is in a position to win at least half of the pot regardless of the final card, but has the potential to the entire pot if the right cards come.

Gutshot: A straight draw in which one of the middle cards is missing (for instance, 3-4-6-7).

Hole Cards: The cards dealt face down to each player.

Kicker: A card that does not impact the value of your hand's rank, but can determine the winner in the situation of a tie. For instance, in the hand AAK42, the player has a pair of aces with a king kicker.

Limp: To enter a pot by calling the necessary bet, but not raising.

Muck: To fold a hand. This term may also refer to discard pile kept by the dealer.

No-Limit: A game in which players can bet any amount in money or chips at any time, up to the total amount they have in front of them at the table.

Nuts: The best possible hand. For instance, on a AA7KK board in a hold'em game, the nuts would be held by a player with AA, as they would now have four aces – which nobody else cold possibly beat.

Offsuit: Cards that are not of the same suit. This is usually used to talk about a player's hole cards in hold'em.

Outs: Cards that will allow a hand to improve to win the pot.

Pot: The pool of money that will be awarded at the end of a hand to the player with the best hand or the last player remaining after all other players fold.

Pot-Limit: A version of poker in which players may bet up to the amount of money in the pot on each bet. This is more restrictive than no-limit, but allows for more betting freedom than limit poker, and is most popular as a form of Omaha.

Pre-Flop: The first betting round, in which players are holding their pocket cards, but the flop has not yet been dealt.

Quads: Another name for four of a kind.

Raise: To bet more than the previous player. Other players will now have to meet the amount of the raise to stay in the hand.

Rake: The money taken by the online poker site or casino from each pot. This is the way in which poker rooms make money (along with entry fees from tournaments).

Rakeback: Rebate offered to a player on a portion of the rake paid at an online gambling site, usually by a third party rather than the poker room itself.

Re-Raise: To raise a bet after another player has already raised. This is also known as a "three bet," with future raises being referred to in a similar manner (i.e. four bet, five bet, and so on).

River: The final community card dealt before the last round of betting.

Satellite: A tournament in which one or more winners are offered entry into another larger tournament.

Small Blind: The smaller of the forced bets required prior to the start of a hold'em hand.

Set: A three of a kind made by combining a pair in your hand with a community card of the same rank.

Shorthanded: Playing poker with fewer players than would normally be at a full table (usually six or less).

Showdown: The point in the game after the final betting round, in which all players remaining in the hand reveal their hands to determine the winner of the pot.

Side Pot: A separate pot created when one of the players is all-in, to contain the bets of the remaining players. Only players that paid into a given side pot are eligible to win that pot.

Sit and Go: A type of poker tournament without a scheduled start time, which begins as soon as the number of required players have joined.

Slowplay: Choosing to check and/or call with a strong hand rather than betting with one in order to disguise the value of a hand.

Steal: A bluff in which a player raises during the first round of betting in an attempt to win the blinds.

Suited: A hand in which multiple cards are of the same suit. In Texas hold'em, both cards must be of the same suit, while in Omaha, two or more make a suited hand (or if there are two pairs of cards of two different suits, one might say they are "double suited").

Tell: A nonverbal, unconscious means of giving away the strength of one's hand. More common in live poker, the timing of a player's bets can sometimes be a tell in internet gambling as well.

Three-Bet: Another name for a re-raise, this refers to the third bet on a betting round: the initial bet, a raise, and then a second raise.

Tilt: A term describing the temperament of a player plays poorly due to frustration, or mental or emotional distraction. That player is said to be "on tilt."

Tournament: A type of poker game in which players pay an entry fee in order to receive a number of chips. Players then remain in the tournament until they have either run out of chips, or they are the final remaining player. Prizes are awarded to top players based on when they were eliminated from the event, with the largest prize going to the winner.

Under the Gun: The player to the left of the blinds, who must act first on the first round of betting.

Value Bet: A bet made by a player who expects to make a profit when an opponent calls. The player need not know for sure they have the best hand, but should expect to be called mostly by hands that they can beat.

WPT: The World Poker Tour, a series of prestigious tournaments held around the world throughout the year.