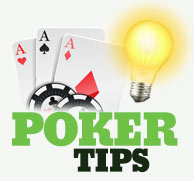 In many forms of online gambling, it's fine to just jump right into the game without much thought. There isn't much strategy when it comes to roulette or slots; just by showing up any playing, you'll probably have the same odds as any so-called expert.

That's not the case when it comes to online poker. If you want to be a good poker player, you're going to have to learn the ins and outs of the game. Professional players use extremely complex strategies and tactics, but even a good amateur player needs to know a lot about the game in order to discover how to win at poker.

While entire books have been written on poker strategy, we wanted to get you started with a few tips that will help make your leap into online poker a little easier. If you're brand new to the game, these poker tips should help you avoid common mistakes made by other inexperienced players – and take advantage of some of the opportunities only found in online gambling.

Play Within Your Limits

One of the most important pieces of poker advice that we can give is to develop proper bankroll management. A serious online poker player will make sure that they have more than enough money to absorb a run of bad luck. They won't take their whole bankroll to play in a big game; instead, they might want to have 20, 30 or even more buy-ins before playing in a particular no-limit hold'em game, for instance.

While you may not want to take your online poker strategy quite that seriously, it's still important to make sure you have some cushion before stepping up to a poker table. Never take your whole bankroll – or even a large percentage of it – to a single table or tournament. Even for the best players in the world, winning on any given night is far from a guarantee, so don't put too much of your money on the line in any single game - otherwise you may lose all of your bankroll and never get the chance to learn how to win at poker.

While learning everything there is to know about poker strategy could take a lifetime, that's no excuse not to learn some of the basics before you start online gambling for real money. Make sure you understand simple poker strategy concepts like aggression, as well as a basic idea of what kinds of starting hands you should be playing from various positions. You'll also want to be certain that you know some of the common odds of winning (such as how often a flush draw will be completed), as well as how to calculate pot odds. For more advanced poker tips, there are plenty of great books, many tailored to specific games (like tournament play, or no-limit hold'em).

In most aspects of life, you really can't get something for nothing. But in online poker, there is a way to win real money without risking a single cent: freeroll tournaments. These tournaments are free to play in, but offer real money prizes to players. Some of these tournaments are open to the public, while others are restricted to players new to a site or those that reach a certain level in a site's rewards program. No matter what, our poker advice is that freerolls can be a great way to boost your bankroll with absolutely no risk!

In most forms of online gambling, drinking is dangerous simply because you could lose track of how much you are spending. But when it comes to poker, there's an added danger. Under the influence of alcohol, it's highly unlikely that you'll be playing your best, which means you're likely to throw away money left and right to your sober opponents. There's nothing a shark likes better than a drunk at their table – Pay attention to this online poker tip and don't let yourself become the sucker that they prey on!

Learn How to Control Tilt

When online poker players allow their emotions to influence their play, we say that the player is on tilt. While on tilt, players almost always make serious mistakes in their play: they may make outrageous bets in order to "get back" at an opponent, call down far too often because they're convinced everyone is bluffing them, or simply throw away more and more money at losing hands.

One bad night of tilt can cause an online poker player to lose days or weeks of profits. Thus, learning to control your own tilt is an important skill to master if you want to learn how to win at poker. It's important to realize what can set you off and how to recover quickly so that you can get back into the right frame of mind. If you can't get yourself off tilt quickly, you can at least learn to recognize it so that you can walk away from the table and save yourself from losing even more money - and that's one of the best poker tips you'll get.

Learn How to Read Your Opponents

One of the disadvantages to playing poker at an internet gambling site is that you can't actually see your opponents, so you won't be able to see visual tells during play. However, there's a much more important skill that you can work on when playing online poker: hand reading. Learning how to narrow down your opponent's potential holdings and react to that range is a critical part of any good poker strategy. You don't have to be able to know exactly what your opponent has – in fact, if you find yourself often saying things like "I put him on AK," you're almost certainly being overly optimistic about your abilities to read hands – but being able to narrow down their range of hands will allow you to make smart plays more often.

Don't Play Too Many Tables

One of the great aspects to online poker is the fact that players have the ability to play many tables at once. Multitabling is a popular pastime for professional players, many of whom play four, eight, 12 or more tables at the same time in order to maximize their winnings.

However, our poker advice is that it's important not to play more tables than you can handle. Even the best players can't win as easily when they play a dozen tables as when they play a single game at once. The key is to find the sweet spot where you'll be the most profitable: a number of tables where you're still winning enough to maximize your total profits.

Master Your Level Before Moving Up

One of the great things about poker is that competitive players naturally find themselves at a stakes level that is right for them. As the stakes go up, the competition becomes more fierce, as players who win at a certain level are the ones likely to move up a level and start playing in tougher games. Win at $1/$2 no-limit poker, for instance, and a player might eventually find himself in the tougher $2/$4 games. The higher you go, the more the regular players have proven themselves to be winners, even against other good players.

This means that before you move up a level, it's a good idea to be sure that you've truly mastered the correct poker strategy for the level you're currently winning at. Don't move up just because you've had one or two good days; instead, be sure that you've been winning there over the long run before you consider trying your luck in tougher games. The added experience will pay off when you start playing against opponents who don't make the same big mistakes the players at your current level do.

Every good online poker player makes sure to take full advantage of the bonus offers they get from poker sites. Like in all forms of internet gambling, bonuses allow you to get some of the poker room's own money without doing anything other than what you were already doing anyway: playing poker!

One great thing about online poker bonuses is the fact that they can help you make a profit even if you're not yet quite good enough to beat a certain level of competition. Here's a good piece of poker advice: if you're only good enough to be about a breakeven player, bonuses and other promotions can allow you to build your bankroll while improving your game at the same time.

When it comes to poker tips, many players overlook the advantage that software can give them. Many online poker rooms have software that includes features you can use to improve your play. For instance, it has become commonplace for online poker rooms to have a notes taking feature that allows you to keep tabs on your opponents' play. If you know a player tends to bluff a lot or easily goes on tilt, you can simply make a note and refer to it at the table later, rather than trying to memorize the tendencies of every single player you've been at the table with.

If you want to go even further in your poker strategy, you might want to take advantage of poker tracking software. These programs allow you to keep a record of your own play, as well as that of your opponents. This can help you find holes in your own poker play - allowing you to win at online poker more often - as well as figure out which of your opponents are fish you can take advantage of, and which ones are sharks you should steer clear from!