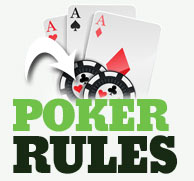 Rules of Hold'em: How to Play Texas Hold'em

Texas Hold'em is a game of complex and ever-evolving strategy. However, hold'em rules are actually pretty simple. If you've never played a hand of hold'em before in your life, the following guide should get you acquainted with the main poker rules and allow you to jump right into online poker!

Texas Hold'em is played using a standard deck of playing cards. Typically, a game of hold'em will feature anywhere from two to ten players at a single table, with seven or more being most common at a full cash game table in a poker room (tables with six or fewer are also popular, but are known as "shorthanded" tables).

The object of the game is to make the best five-card poker hand possible. Players do so by combining the two cards in their own hand with the five community cards that are dealt in the center of the table during the game. Players may use any combination of these cards, but only the best five cards count towards their hand.

Hand rankings in hold'em are the same as in most standard poker games. Here's a quick look at the types of hands a player can make in hold'em, from best to worst:

Straight Flush: This hand consists of five cards of consecutive ranks, all of the same suit, such as 9-8-7-6-5 all of diamonds. The best possible straight flush, A-K-Q-J-T of the same suit, is also known as a royal flush.

Four of a Kind: This hand consists of four cards of the same rank, such as 8-8-8-8-T. The higher the rank, the better the hand.

Full House: This hand consists of three cards of one rank and two cards of another, such as Q-Q-Q-9-9. Full houses are ranked first by their three of a kind, then their pair.

Flush: This hand consists of any five cards of the same suit.

Straight: This hand consists of five cards of consecutive rank, such as J-T-9-8-7.

Three of a Kind: This hand consists of three cards of the same rank, such as 5-5-5-K-T.

Two Pair: This hand consists of two cards of one rank and two of another, such as K-K-7-7-J. Two pair hands are ranked first by their higher pair, then by their lower pair.

High Card: All other hands are ranked by the value of their highest card (or cards, in case of a tie). For instance, A-J-6-4-3 would be an "ace-high" hand.

At the start of a hand, one player will be assigned the dealer button. In a casual game, this will denote the player responsible for dealing the cards, while at an online gambling site or a live casino, it is simply used to show who will act last on each round of betting. The two players to the left of the dealer button must make forced bets before the action begins. These bets are known as blinds: the player directly to the left of the dealer posts the "small blind," while the second player posts the "big blind." The sizes of the blinds are determined by the stakes at which the game is being played.

Once the blinds have been posted, the dealer will deal two cards to every player. At that point, the betting can begin.

Play begins from the left of the dealer. On the first round of betting, the blinds do not have to act immediately, as they have already posted their forced bets. Other players have the option to fold (forfeiting their hand and ending their chances to win the pot), call the current bet, or raise the bet to a new amount. The first round of betting only ends when all players remaining in the hand have called the current bet, or when there is only one player remaining – at which point that player wins all of the money in the pot.

Assuming at least two players are remaining in the pot, the dealer will now deal out the first three community cards, which are known as the flop. Betting once again begins from the left of the dealer. Players have the option to check – essentially passing the option to bet – or bet. If every player checks, the round ends with no bets made. If a player makes a bet, players may then call, raise, or fold as normal. Once again, the betting round only ends if all players have called the current bet, or if only one player remains in the hand, winning the pot.

If two or more players make it past this round of betting, all remaining players must now reveal their hands in the showdown. The highest ranking hand wins the entire pot. Should two or more players have the exact same hands, those players split the pot as evenly as possible. The button then moves one seat to the left, new blinds are posted, and the next hand can begin.

There are four betting formats in which Texas Hold'em are played, two of which are commonly found at internet gambling sites (though the third is not unheard of). The first betting format is limit (or fixed limit). In a limit game, all bets and raises are of a fixed size. This size is normally smaller on the first two rounds of betting, and increases for the final two rounds.

Perhaps the most popular form of hold'em played today is no-limit hold'em. In this form of the game, players may bet any amount they want at any time, up to all of the money they have with them at the table. Betting all of a player's remaining money is known as going "all-in."

Two less common formats fall between these two extremes. The first, pot limit, allows players to make bets and raises up to the current pot size. While hold'em is played in this format, it is more popularly used in Omaha. The other format – spread limit – is more commonly utilized in live casinos. In this format, players may bet any amount within a specified range, such as $1-$5. In some casinos where no-limit poker isn't offered, a wide spread-limit game might be used as a reasonable replacement, such as a $1-$150 game.